There are three things in this world that I hate more than anything. Liars, thieves & Liars.

I said liars twice, I hate them the most.

If we don’t get money out of politics, nothing we do will matter.

Make no mistake, the government (or the people it’s supposed to represent) are not in control of this country. The real control lies with the elites, corporations & special interest. Don’t believe me? Just read the ◀1% problem.

I’ll tell you why. MONEY!

So, who cares about truth?

I do! I always try to tell the truth, almost to a fault. If someone asks me a question, I give them an honest answer. If they don’t like the answer then, maybe they should not have asked the question.

I do this for two reasons.

ONE: I hate liars. &
TWO: I will never remember the lie I told anyway, so I tell the truth to keep my story straight.

Why do I hate this country?

I don’t. This country is an awesome one, for sure. It is full of some amazing people. People who are determined to make their mark & live the ‘American Dream’. I do not hate this country; on the contrary I love it. This is my country & I am proud to be an American.

That said, I am also disgusted by the people who try to manipulate America for their own greed & corruption. It is our duty to stop people who disrespect the USA, & I am not afraid to call them out. Democrat, Republican, Independent or anyone, we should never be silent.

Here are a few of the terrible things done against the USA before Regan drove her into the grave.

So, to be clear Regan did not start our political problems, but,

he did give them a big boost. 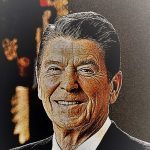 The Beginning of the end.

In 1980 Ronald Regan was elected as the 40th President of the United States.
Things would never be the same again.

I could talk all day about the scandals during Regan’s presidency. Hell, almost 140 of his collogues were investigated & 21 members of his administration were convicted. But I am focusing on the long-lasting corruption, specifically ‘money in politics’. Yes, I am talking about ‘Reganomics’ or ‘voodoo economics’ if you prefer.

What it boiled down to was basically this; if you cut taxes on the wealthy, they will use that savings to create more jobs. What actually happened was they put that extra money right back in their pockets. The fortunes of the rich were supposed to ‘trickle down‘ to the lowly commoners. Big surprise to nobody that didn’t happen.

Many people bought into this bullshit & let it keep being heaped on them still to this day. My dad believed in the idea that the Republicans were the party of the people & no amount abuse from his wonderful elephants would change his mind.

The first time I voted was in 1984. I voted for Regan, because my dad convinced me that he was the ‘savior of the people’ & that Walter Mondale was Lucifer. Boy was he wrong. By the ’88 election I was a bit more informed & voted (begrudgingly) for Michael Dukakis. Funny story, I met him (briefly) in the DFW airport.

So, Regan set in motion the idea of ‘trickle-down economics’ that is still being pushed on Americans today.

Here are a couple of other fun things he did.

In 1981 Ron fired 11,000 air traffic controllers who went on strike & replaced them all, effectively crippling unions for the future.

His administration provided weapons to Saddam Hussein, even after most of the world condemned him for using chemical weapons to kill over 5,000 civilians.

He also supplied weapons to Saddam’s enemy, Iran, during their war in direct violation of a U.S. law that he had signed.

In 1987 an Iraqi fighter jet fired a missile into a U.S. Navy ship, killing 37 men, Reagan did nothing. After all he needed someone to sell weapons to.

Reagan supported the violent overthrow of a democratically elected government in Nicaragua by the Contras who murdered civilians & wanted to restore a dictatorship. He called them ‘freedom fighters’.

After a terrorist’s truck bomb in Beirut killed 241 U.S. Marines, Regan caved to their demands & pulled the remaining troops out.

After that failure he did a ‘Wag the Dog‘ mauver and launched an attack on the island of Grenada to remove Cuban soldiers.

The U.S. Congress overwhelmingly passed the Anti-Apartheid Act of 1986 to apply pressure to South Africa to end its racial oppression. But Reagan vetoed the bill & Congress had to override his veto.

Finally, he repealed a law put forth by Jimmy Carter to help fix our mental health facilities in America spurring a host of homelessness & crime including our first mass shooting. [McDonalds in CA, 21 dead, 19 wounded]

There was a lot more that Mr. Regan did, but he opened the floodgates that have still not been closed, creating so much crap for the American people, we may never dig our way out.

You say, ‘I am rich; I have acquired wealth and do not need a thing.’ But you do not realize that you are wretched, pitiful, poor, blind and naked?

Ahh, the wealthy, the 1 percent, the elites, millionaires, billionaires, Trillionaires (not quite yet). The top 1% of the wealthiest Americans earn 26 times more money than the bottom 99% (on average). The 1% has 42% of all of the wealth in this country.

At one point Jeff Bezos, Bill Gates & Warren Buffet had more combined wealth than the lowest 50% of Americans earners. That means that 3 people had more wealth that 160million Americans.

During the first year of the covid pandemic Billionaires got 54% richer while the number of people below the poverty line grew by over 100million.

The 1% actually do pay (mostly) a good amount of taxes, about 37% of the nation. But a lot of them do cheat the system and do not pay their fair share.

There is a thing called ‘the Giving Pledge‘. This is a promise by the world’s wealthiest people to donate a majority of their wealth to charity. There are a lot of big names, such as: David Rockefeller, Ted Turner, Bill Gates(founder), Michael Bloomberg, Warren Buffett, Elon Musk, T. Boone Pickens & Mark Zuckerberg. Notice that Jeff Bezos is missing from the list.

This is a good thing, but a big problem is, what charity are they giving to? A better solution would be to fix the tax loopholes & start making them pay their fair share. A lot of the one percenter’s pay little to no taxes. Many of the big companies, like Amazon, also pay 0% of taxes.

Until we, as a nation, come together & say “Enough!” there will never be financial equality in the USA. I don’t want the 1% to pay all of their money, just a fair percentage.

Is that too much to ask?

So, Regan had “Let’s Make America Great Again” while Trump just dropped the “Let’s”. Jeez, he couldn’t even think up an original slogan.

If the Trump presidency taught us anything it’s that Republicans are just mean.

I don’t even know where to begin talking about our EX-President Donald J Trump. To put it simply, he is nothing more than a con man. He convinced 30% of our population that he was a great businessman. In reality, almost all of his businesses failed. He told them he was smart, then he said things like “water is wet”. He said he was a devout Christian but couldn’t name any Bible verse.

The worst thing was that his base believed him. No matter how many things he totally screwed up, they just kept believing him. He stole their money & gave it to his rich friends, they just let him. He told them not to get vaccinated in one of the worst pandemics the world has seen, & they literally died because of it.

There is only one reason this would happen. The MAGA movement was not a political movement, but a full-blown CULT!

This was brainwashing as a result of irrational fears. Fears about people who were different colors, religious beliefs, nationalities or sexual preferences. These fears were capitalized on by the Republican party for their own benefits. The mainstream media was all too happy to join in the fight, spreading the misinformation to the masses.

For the entire four years the Republicans in Congress did nothing more than sling vile, hateful comments at their enemies to appease their base. I’m not sure they got anything accomplished in that entire time. Well, they did raise a LOT of money for themselves & that seems to be the point of our government.

The conservatives are completely corrupted & MAGA was just the beginning. Hold on to your butts…

So, the same type of corruption has been around since George Washington. I don’t think it will ever stop.

But we should never stop trying to stop it.

Things have gotten so bad, I’m not sure there even is a solution. A lot of people have tried. Obviously, they have all failed. Some of them, in fairness, succeeded to a point, but their plans all succumbed to the corrupting forces of greed & power.

The most important thing is to make your voice heard. Get involved, organize rallies, vote for everything, support good politicians or run for office yourself. You don’t need special credentials to run for public office, after all it is PUBLIC office.

Here are some of the actions that are being proposed & implemented now.

Thanks for reading my rant about Politics & Dishonest People.